There has been a school in Carrickleck for almost 200 years. In the early years it is likely that the school was controlled by the Irish Society. When the motives of this Society were questioned the school was closed. Another school was established in Carrickleck on May 19th 1856. It was a thatched house built of stone, originally built by a farmer and subsequently sold as a schoolhouse. It was located along the north wall of the present school. Records show that Fr. Flood built a new school in 1896. The plaque on the school wall says it was built in 1893! Mr. Riordan, a lawyer, living in Dublin, was the landlord of the area at that time and he gave the site for the school free of charge. Frank Smith, who was the tenant of the land, got Â£5 for the site. The contractor for the school was Anthony Oâ€™Reilly who lived in Kingscourt. He supplied timber and slates. Dan McConnon from Bailieboro and his two sons, Dan and James, were the stonemasons. The carpenter was Mick Ward from Kingscourt. The stones for the walls of the school were quarried at the back of the school by members of the Smith family. The lime for the walls came from Barley Hill limekiln and the sand from Carrickleck Rock.

The first teacher in the new school was Mr. Patterson from Enniskeen. Little is known of the early years of the school. The pupil registers date back to 1895 and list all the children who attended since then. The sketch below shows ‘Cooney’s House’. This house, now derelict, is across the road from the school and was once occupied by Ms. Cooney, a former teacher in the school. 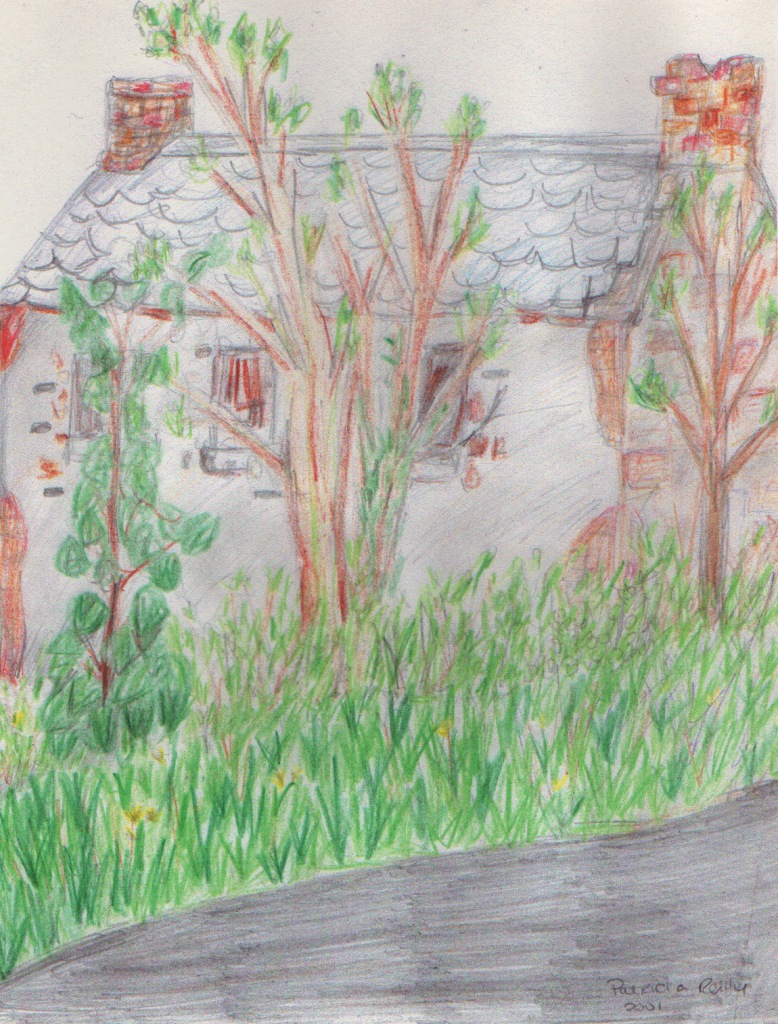 Down through years the school has served the community well, through periods of emigration, two World Wars and a Civil War. From the days before the Famine to modern times, the school has always been small, with enrolment figures rising and falling with population trends. Past pupils of the school are frequent and welcome visitors during the summer months, when they come on holidays.

In 1976 the school was in a poor state of repair. A local committee was formed and made plans for essential improvement works. The committee, with the full support of everyone in the community, then set about raising money to upgrade the school. Some novel and innovative fundraising events were organised. One of these events was a very successful raffle with the first prize being a pure bred heifer calf! A lot of money was raised with a sponsored walk. Everyone in the community took part, from babies in prams to old age pensioners. The McGuinness brothers led the walk, with Paddy on the accordion and Tommy keeping everyone in song as they set off from the school. They walked into Kingscourt and out the Navan Road where they stopped at the Gypsum Factory for some welcome refreshments supplied by Justin Macken. They headed back by Rathloghan to finish at the school.

With the money raised, the restoration work began on the school. In 1978, a water supply was connected to wash basins and flush toilets in the new outside toilet block in the playground. Over the next 5 years the front of the school was concreted, a small field at the rear of the school was purchased, the small classroom was made bigger, the ceilings in both classrooms were lowered and the school was painted.

1983 was a significant year of change in Carrickleck N.S. Rosena Jordan was appointed in January of that year and taught in the school until 2004, Mrs. Rose McKiernan, who had been principal in the school for twenty-five years retired and Michael Kieran, current principal, was appointed to his position. In September of that year, a new prefabricated classroom was erected. This new room was a great addition to the school and provided a bright and spacious environment for the 32 pupils in the junior classes.

A new pre-fabricated unit was erected on site to be used as a classroom for the Junior Room.

The clay banks and unsafe dividing wall at the back of the school were removed. A safe and clean play area was drained and gravelled.

The old windows were replaced by 6 single glazed aluminium windows and the external walls were plastered.

The original school building was completely refurbished. The pot-belly stoves were replaced with electric storage heating. The wooden wall panels were also removed. A Dept. of Education grant was received and paid for 85% of this work.

An extension was built to include a new classroom, boiler house, toilets and oil fired central heating. The old toilet block was demolished. A Dept. grant paid for 85% of the work. 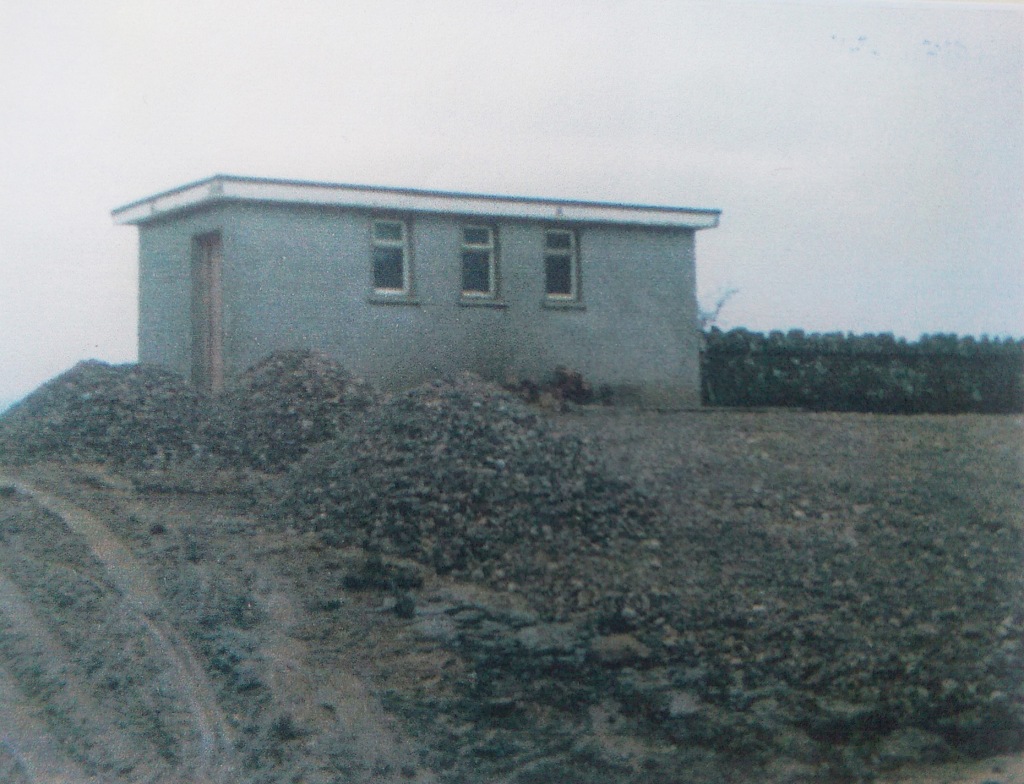 The school yard at the rear of the school was covered with tarmac.

Painting of the whole school was completed and a secretary/caretaker was appointed. 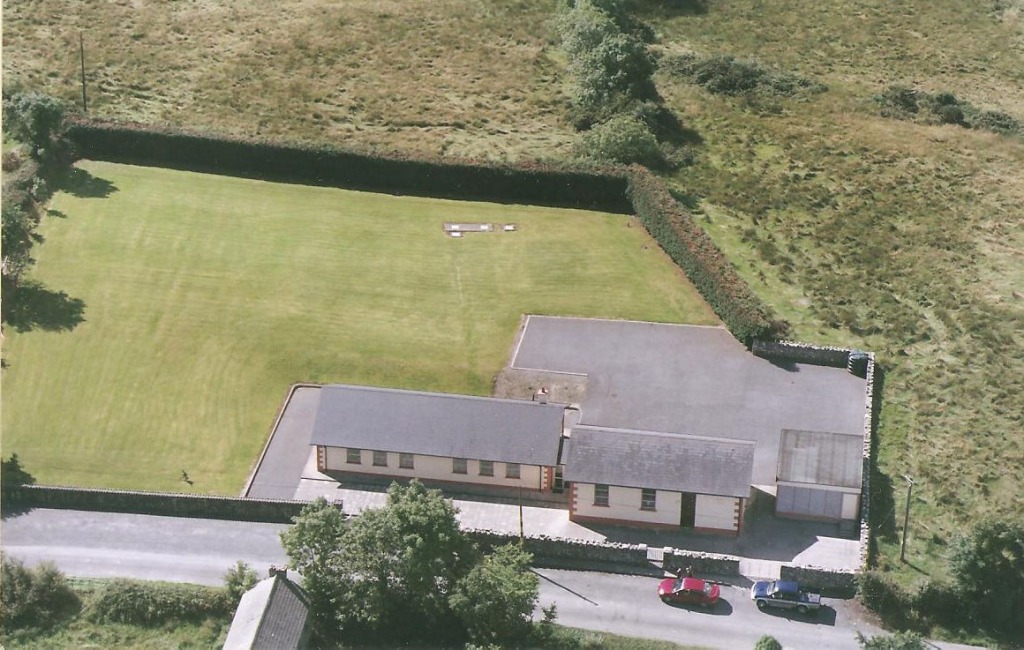 The Summer Works Scheme paid for the building of the astro-turf pitch (24m x 21m). This new facility has proved to be an invaluable addition to our school.

The development of a small football pitch which measures 20m by 50m was completed. The work involved digging, levelling, drainage and covering with stone, silica sand and topsoil to create an excellent surface for field sports like rounders, football, soccer and athletics.

A new interactive Smart Board was fitted in the Junior Room to enhance learning.

The 6 single glazed aluminium windows were replaced by 6 triple glazed windows to conserve heat in the original building and save on energy costs.

Approval was granted for the removal of the pre-fab and the building of a SEN room (16m.sq). A car park with 9 designated parking bays as well as a disability parking space was developed and a new electronic gate was fitted at the new entrance. The Dept. of Education provided most of the funding for this work. The work was completed in August and the new room was furnished and occupied in early September.

A new interactive Smart Board was fitted in the Senior Room. 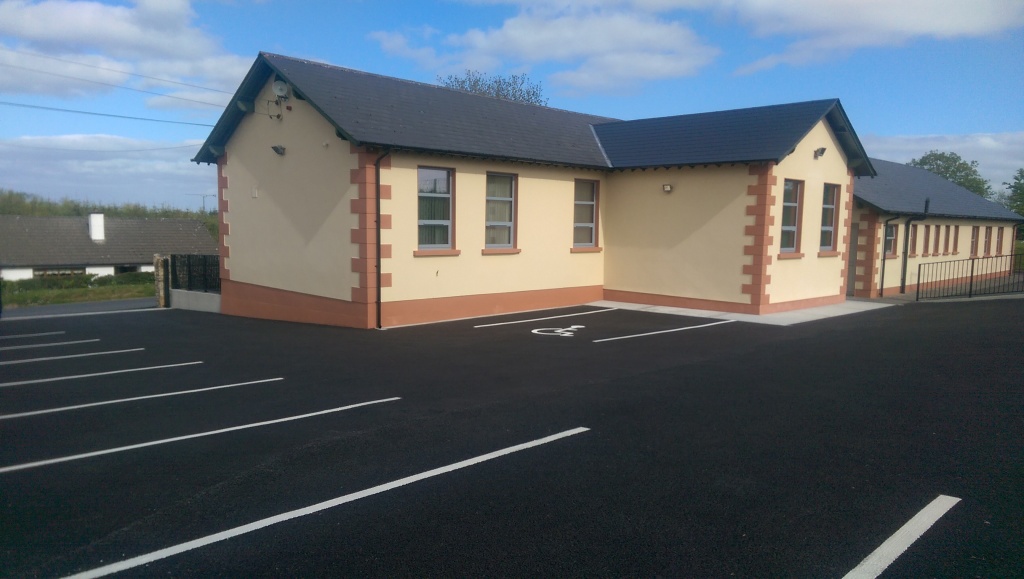